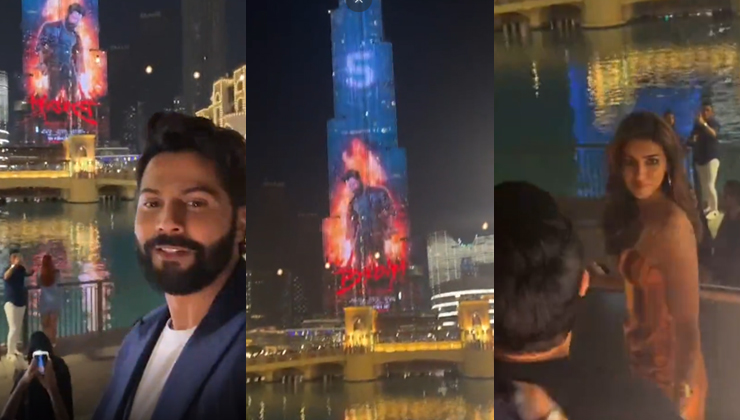 Varun Dhawan and Kriti Sanon on Friday shared a video on Instagram as the trailer of the upcoming movie Bhediya was screened on the world’s tallest screen, the façade of the Dubai skyscraper, Burj Khalifa. The actors gave a sneak-peek into the excitement as the Bhediya trailer lit up on the Burj Khalifa.

On his Instagram, Varun Dhawan even mentioned that in excitement, he even dropped his phone while filming the Bhediya trailer featuring on the world’s tallest screen. The actor shared the video from the moment.

Sharing the video, the Bhediya actor wrote, “Bhediya trailer at the bhurj khalifa,” and added, “I got so excited I dropped my phone bhediya out on the 25 th Nov.”

Kriti Sanon also shared another video from the time when the Bhediya trailer was screened on the Burj Khalifa. The actress in her caption called it a ‘big moment’.

Sharing the video, the Bhediya actress wrote, “And the #Bhediya trailer howled loud on none other than the #BurjKhalifa !!! Big moment!”

Meanwhile, it was a few days ago that the team of Bhediya jetted off to Dubai for the movie promotions. Kriti and Varun continued to share videos and gave fans a peek into their fun time together during the Bhediya promotions.

Talking about the horror-comedy, Bhediya is directed by Amar Kaushik and features Varun Dhawan as Bhaskar Chopra, Kriti Sanon as Dr. Anika Kotha, Deepak Dobriyal and Abhishek Banerjee, in key roles. The movie will also see Shraddha Kapoor making a cameo appearance in her role as Stree. The Amar Kaushik directorial is the third installment in Vijan’s horror-comedy universe.