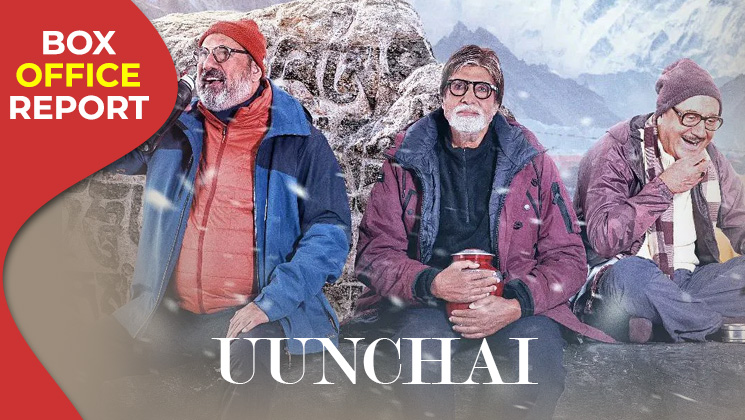 Amitabh Bachchan, Anupam Kher and Boman Irani starrer Uunchai was released on November 11. Directed by Sooraj Barjatya, Uunchai also starred Parineeti Chopra, Neena Gupta, and Sarika in pivotal roles. Big B, Anupam, Boman and the cast members delivered good performances in the film. Uunchai opened to good numbers at the box office. Now after a week, Uunchai saw a drop in its box office collections on the second Monday.

According to Box Office India, Uunchai collected only 60 lakhs on second Monday which is around 50% down from the second Friday.

According to a Box Office India report, “The film does have a heavy budget of 75 cr approx. but that was never a problem as the recovery from satellite, digital and music was around 70 crore due to the director Sooraj Barjatya track record.”

Here are the Uunchai box office collections so far:-

Ajay Devgn, Shriya Saran and Tabu starrer Drishyam 2 released on Friday last week. It’s been only a few days but the sequel is doing well at the box office. Drishyam sequel is unstoppable at the box office as its collecting good in numbers. Given Drishyam 2’s success, Uunchai is expected to slow down.

On the other hand, Bollywood Bubble gave Big B, Anupam and Boman starrer Uunchai three and a half stars in the review.