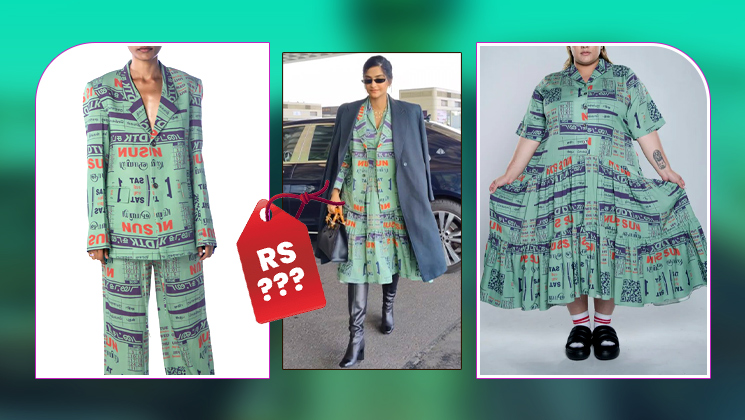 Sonam Kapoor made a fashion statement at the Mumbai airport on Wednesday, for the first time since her son Vayu’s birth. And, the actress oozed oomph. Sonam looked all things classy and elegant. However, did you wonder how much her outfit’s cost would solely come upto? The whopping price will surely blow your mind. But, Kapoor’s affordable fashion statement is en pointe!

Taking to her Instagram, Rhea Kapoor shared a string of photos of her sister Sonam Kapoor as she styled her. She dropped photos and mentioned what the Zoya Factor actor wore. Sonam also shared a video and revealed she wore a patterned print dress and blazer by the brand, Doh Tak Keh. Kapoor opted for the Calender print offered from the brands’ various collection, inspired from a Tamil Calender found in a weaver’s house in India’s Kanchipuram.

Further decoding Sonam’s outfit, the actress opted for an oversized fit shirt dress with asymmetrical tiers, worth a sum of Rs 8,100.

And, she paired her oversized dress with a relaxed fit blazer with a lapel collar, costing Rs 9,900.

Kapoor completed her outfit with a forest green trench coat from Staple worth Rs 6,999, according to the company website.

The new mom finished her fashionable airport look with thigh high boots from Tods and a Gucci bag, making a stylish appearance.

Going by her complete airport look, including only her dress, blazer and trench coat, Kapoor opted for an outfit costing Rs 24,999, in total.

Check out her video below:

Meanwhile, Sonam Kapoor even posed elegantly for photos when she was clicked at the airport. The actress looked spectacular as she channeled her inner fashionista.

Watch the airport video below:

On the personal front, Kapoor welcomed her first child, a Baby boy, with husband, Anand Ahuja a few months ago. It was only recently that the actress shared a first glimpse of her little one.

Also Read: Sonam Kapoor keeps it classy as she makes an appearance at the airport after son’s birth- WATCH