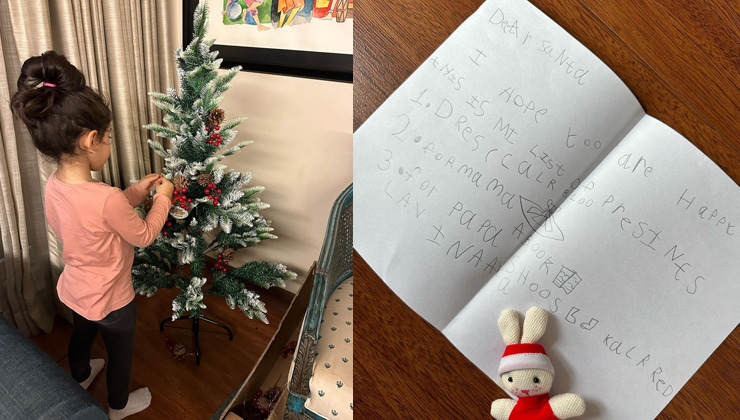 Sharing the photos of Inaaya and her note, Soha wrote, “Only a month to go so we thought we should get into the spirit of things… starting with our letter to Santa #christmas #christmastree. (sic).”

In her note, Inaaya Naumi Kemmu told Santa Claus what she wants in her Christmas presents. She sent Santa her love and mentioned she wants a dress in the colour blue for the festive season. The little one was not done yet. Inni further even asked for presents for her parents. She told Santa to gift her mother Soha a book and her father, Kunal Kemmu, shoes. The little one also asked Santa if he’s happy in her sweet note.

Many fans and friends reacted to the post made by Soha. Lara Dutta took to the comments section of the post and commented, “I hope Santas paying attention !!. Colours are quite specific!” Another user in the comments said, “Hahaha awww ‘shoos’ and ‘ Kalr’. Just too adorable,” while one social media user wrote, “Awwww her letter just made me cry.“

Meanwhile, Soha constantly treats the internet and her Instagram followers with glimpses from Inaaya’s day-to-day routine. It was only recently that the actress had shared a glimpse of Inaaya’s door Warning. The little one had put out a warning on her door, asking the entrants in her room to ‘Please nok’.

Also Read: Kunal Kemmu gets a handwritten note from daughter Inaaya as his directorial debut Madgaon Express goes on floors