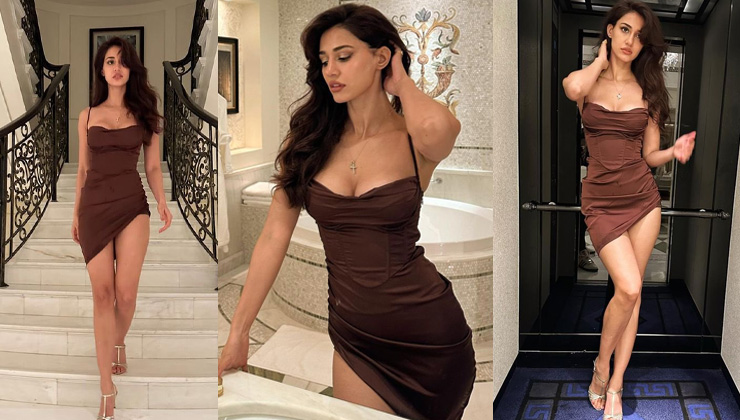 Disha Patani on Saturday shared a string of hot photos on her Instagram. The Yodha actress leaves no chance to impress her fans and treat them with some flawless photos. Once again, on Saturday, Disha Patani shared hot photos of her on Instagram where she looks jaw-dropping.

The Project K actress looks spectacular, posing in a brown satin dress. She exudes hotness in the dress. In the first picture, Patani oozes oomph as she poses by a bathroom sink. She is clicked standing in a bathroom space. Disha has accessorized her overall chic look with a cross pendant necklace.

In the second photo, Patani looks drop-dead gorgeous as she walks down the stairs. She is wearing golden heels. The last picture shows Disha flaunting her perfectly toned physique while posing by a wall.

Taking to the comments section of the post, Disha’s fans couldn’t help but express their thoughts. One user wrote, “Patani lookin gorgeous jus like always,” while another user said, “Hottie Patani.” A third user commented and wrote, “Hotness and cuteness both are perfectly balanced…” A fan of Disha called her “The most beautiful girl in the world”  “Always my favourite,” said another fan, reacting to the photos shared by the Yodha actress.

Meanwhile, in the last few days, Patani has made headlines as photos with a mystery fan surfaced on social media. The Suriya 42 actress was also spotted heading out of a restaurant with the mystery man.

On the work front, the actress has the movie Yodha with Sidharth Malhotra and Raashii Khanna in her kitty. She also has Suriya 42 and Project K with Prabhas, Deepika Padukone and Amitabh Bachchan.