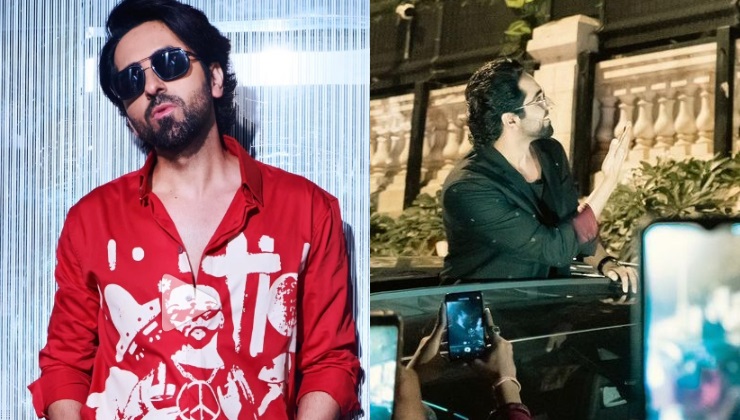 Ayushmann Khurrana is gearing up for the release of his upcoming movie An Action Hero. The actor will be seen donning a never-before-seen avatar of an action hero in it. The posters and the trailer have already increased the anticipation of fans. They are now eager to see the vicky donor actor in his latest role. The actor who is currently busy with the promotions of his film has proved that he is a true blue Shah Rukh Khan fan in a unique manner.

In the picture, we can see the actor looking dapper in a Black coat peeping out of his car and looking at Mannat. He is surrounded by a bunch of fans who are busy clicking his photo. Ayushmann is seen with his hands up in the ‘dua’ position and has a smile as he looks up at Shah Rukh Khan’s bungalow Mannat.

No sooner did Ayushmann share the picture on social media it received love from fans and friends. Maniesh Paul wrote, “this song and especially these lines!!! many fans shared heart emojis and some shared fire emojis in the comment section.

Recently at an event, Ayushmann Khurrana spoke about Shah Rukh Khan’s impact on his life. “I took my studies seriously because of him, I took mass communication because of him(Shah Rukh Khan),” he said. On being asked if he came to Mumbai to become SRK the actor said, “No one can be like Shah Rukh Khan.”

‘An Action Hero’ is directed by Anirudh Iyer, produced by Aanand L Rai, and produced by Bhushan Kumar and Krishan Kumar. It will release in theatres on December 2.

Also Read: Anek Teaser: Ayushmann Khurrana is on a ‘mission for peace’ in Anubhav Sinha directorial