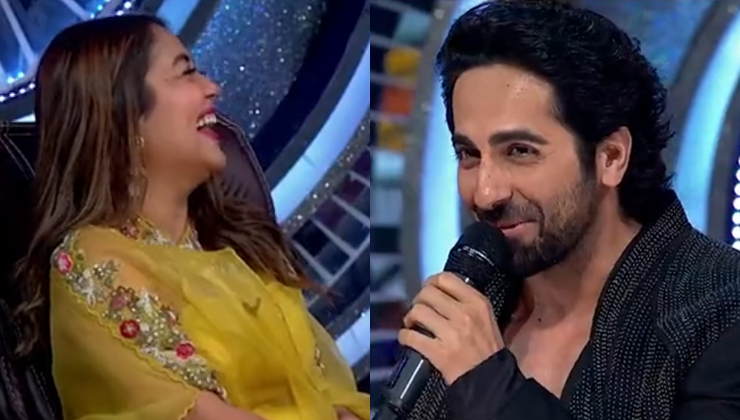 Ayushmann Khurrana is one of the popular actors in Bollywood. The actor has made it on his own. Before he became an actor, Ayushmann was working as an RJ. In case you don’t know, he even aspired to be a singer. Ayushmann is currently busy promoting his upcoming film, An Action Hero. The actor is set to make an appearance on the singing reality show Indian Idol 13.

In the promo of the upcoming episode, Ayushmann reveals that he once auditioned for Indian Idol 13 and was rejected. Not just Ayushmann, Neha Kakkar, who is seen as a judge on the show, was also rejected on the same day.

In the promo, Ayushmann says, “Neha and I were rejected on Indian Idol on the same day. We travelled together in the train, from Mumbai to Delhi. There were 50 of us, who were rejected together and we were all travelling. Neha aaj judge hai aur main yahaan par aaya hu (Neha is a judge today and I am here too).”

Neha Kakkar is one of the most popular singers. She has given hit songs like Second Hand Jawaani, Sunny Sunny, Kar Gayi Chull, Garmi among others.

On the other hand, Ayushmann made his Hindi film debut with the romantic comedy, vicky donor. The actor later went on to star in films like Dum Laga Ke Haisha, Shubh Mangal Savdhan, Badhaai Ho, Dream Girl, Bareilly Ki Barfi, and Andhadhun among others.

Talking about his upcoming film, An Action Hero also stars Jaideep Ahlawat. It is slated to release on 2nd December.

Apart from this, Ayushmann also has Dream Girl 2 with Ananya Panday.