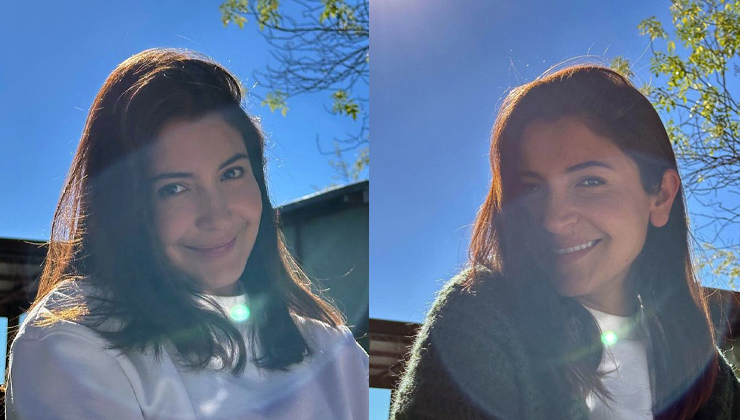 Anushka Sharma dropped an absolutely stunning sun-kissed photo on social media. She looks radiant in this look. Meanwhile, the sun-kissed photo shows Anushka standing on the balcony and smiling at the camera. Fans are all hearts.

In the pictures, Anushka Sharma looks gorgeous in sun-kissed selfies. She is wearing a white tee in the first image. She has no makeup on and left her hair open. She is glowing in the sunlight and is grinning sweetly. She has pictured in the following image sporting a similar, adorable smile while donning a sweater. Anushka simply shared an emoji with these pictures.

On the other hand, Virat and Anushka recently went to a temple in Nainital together. Anushka and Virat took blessings while also posing for photos with their admirers. The much-loved couple went to a temple in Kaichi Dham, which is a neighborhood of Nainital.

On the work front, after welcoming their daughter Vamika, Sharma is preparing for her upcoming film, Chakda Xpress. Jhulan Goswami, an Indian cricket player, will be portrayed by the actress on screen. The movie will premiere on OTT platform.

Earlier, the Band Baaja Baraat actress posted a video and an extensive note announcing the movie. She wrote in part of her caption, “As a woman, I was proud to hear Jhulan’s story and it is an honor for me to try and bring her life to audiences and cricket lovers. As a cricketing nation, we have to give our women cricketers their due. Jhulan’s story is truly an underdog story in the history of cricket in India and the film is our celebration of her spirit.”

She last appeared in the 2018 film Zero alongside Shah Rukh Khan and Katrina Kaif.

Also Read: Anushka Sharma and Virat Kohli twin in black as they visit an ashram in Uttarakhand, see viral pics