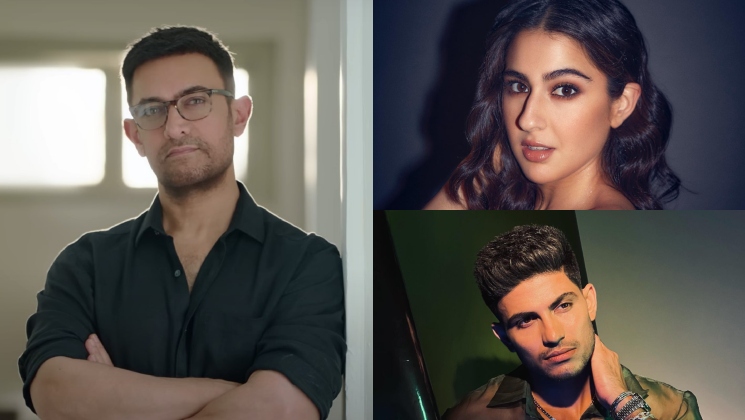 The gone week has been quite busy for the Bollywood fraternity as there were release date announcements, some unfortunate losses, and a lot of things doing the buzz. While Bipasha Basu and Karan Singh Grover stayed in the news for bringing their daughter Devi home after her birth the previous week, many more celebrities hit the headlines for mostly the right reasons. From Shubman Gill almost confirming dating Sara Ali Khan to Aamir Khan announcing break from movies and Karan Johar reportedly launching Ibrahim Ali Khan, here are some of the stories that stayed on top of the headlines during the week.

See Top 5 Newsmakers of the Week!

This year Aamir returned to the big screen after four years with his ambitious project Laal Singh Chaddha, an official remake of the Oscar winning Tom Hanks’ film Forrest Gump. The film, however, failed to perform well at the box office and at a recent event in Delhi the actor shockingly announced a temporary break from acting going further. He said, “When I am doing a film as an actor, I get so lost in that that nothing else happens in my life. I was supposed to do a film after Laal Singh Chaddha called Champions. It’s a wonderful script, a beautiful story, and it’s a very heartwarming and lovely film. But I feel that I want to take a break and be with my family, with my mom, and my kids.” Read the full story at length HERE.

First it was Paresh Rawal who took to Twitter to announce that Kartik Aaryan has joined the Hera Pheri franchise, and then Akshay Kumar himself confirmed his exit from Hera Pheri 3. The past week, Suniel Shetty finally opened up on his take on the issue sharing that he is still holding out hope of a way through. He said, “Akshay, Paresh and I had committed to the movie, and this twist has stunned me. Hera Pheri 3 cannot be the same without Akshay. Raju, Babu bhaiyya and Shyam are iconic characters whose journeys have been together. There’s palpable excitement when you mention the film. I want to see if things can still fall in place.” Read it at length HERE.

Saif Ali Khan‘s son Ibrahim Ali Khan has already began his journey in Bollywood as he is assisting Karan Johar on his next directorial, Alia Bhatt and Ranveer Singh-starrer Rocky Aur Rani Ki Prem Kahani. But the latest reports suggest that the filmmaker is all set to launch the youngster in his Bollywood debut as well. The movie is reportedly based on defense forces and is expected to start rolling in 2023. The untitled project will be directed by Kayoze Irani, the son of senior actor Boman Irani. Read the full story at length HERE.

While Ibrahim was in news for his reported debut, his sister Sara Ali Khan was in news for her alleged relationship with cricketer Shubman Gill and the speculations got stronger last week as the cricketer appeared on Neeti Simoes and Preeti Simoes’ talk show and reacted to the dating rumours. When asked to tell the truth, he said, “Sara da sara sach bol diya. May be, maybe not.” Read it at length HERE.

Hrithik Roshan and Saba Azad spark rumours of moving in together

While Hrithik and Saba now don’t shy away from making appearances together in public, the gone week they hit the headlines when rumours surfaced that the couple is planning to move in together. A source had told India Today, “They will be moving in together into an Apartment in a building called Mannat in Mumbai. The top two floors of the building are being renovated. And the couple will shift there very soon.” However, an update came on to that report on Sunday when a source informed, “There’s no truth to the stories of Hrithik & Saba moving in together. They are in a happy place now and this is definitely not on their minds.” Read it at length HERE.

While these were the top newsmakers, there were others too who created quite the buzz as Vicky Kaushal announced the arrival of his next Govinda Naam Mera on OTT and released its trailer today, Mahesh babu losing his father, Aamir’s daughter Ira Khan getting engaged to boyfriend Nupur Shikhare and Aamir and Kajol having their on screen reunion in Salaam Venky after Fanaa.

Also Read: Akshay Kumar on his exit from Hera Pheri 3 to Bipasha Basu welcoming a baby girl: Top 5 Newsmakers of the week